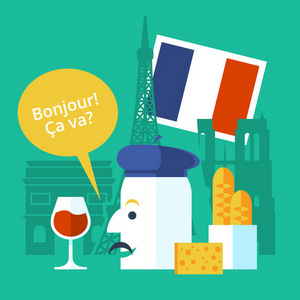 Until about 20 years ago, French was considered the most important foreign language for English speakers to learn. But Spanish surpassed French in the United States sometime in the ’90s, and in recent years, as the economies of the BRIC countries (Brazil, Russia, India, China) have expanded, so has the perceived importance of their languages, toppling French from its lofty pedestal. With the growth of China as a superpower, Mandarin is sometimes considered the new global language of influence.

English journalist Jeremy Paxman and American linguist John McWhorter made instant headlines when they proclaimed, in 2016 and 2014, respectively, that French is "bad for you" and "useless"[1] and “a distinctly low priority”[2]. Response from Francophones and Francophiles was swift and furious.

The facts are these: French is an official language in 29 countries and of the United Nations, European Union, International Olympic Committee, International Red Cross, and dozens of other organizations. It’s currently spoken by nearly 230 million people[3], and investment bank Natixis projects[4] that by 2050, French will be spoken by at least 750 million, possibly even surpassing Chinese and English to become the most spoken language in the world.

Moreover, an ingenious study by researchers at MIT[5] shows that French remains one of the most influential languages in the world. The researches created three maps of global language networks to show relationships between different languages:

While English was revealed as the most influential language in all three maps, French is also prominent, especially in regard to book translations.

So, is French still important? If the above facts don’t speak for themselves, perhaps there’s something else going on. To his credit, McWhorter is quick to assert that bilingual education is invaluable for immigrant kids, but claims that the perceived importance of French above other languages is nothing more than a holdover of a "class marker" akin to classical music and snidely calls French knowledge a criterion for "what used to be called ‘people of quality.’ "

For his part, Paxman isn’t arguing just against French, but seems in fact to be fighting for monolingualism – that single language being his own, natch. Why would a person who believes that "English is … the one language that you must have" bother learning any other? While his love affair with English allows that "[t]here is absolutely nothing wrong with studying any language as a hobby or mental discipline," only Chinese, Arabic, and Spanish make the cut. French is diminished to "a beautiful language," apparently on a par, in terms of impracticality, with Sanskrit.

Well, is it worth learning any language? The answer is, without a doubt, yes. Should that language be French? That depends – do you want to travel or live in a French-speaking country? Do you hope to work for an international organization? Would you like to watch nouvelle vague movies and read romans naturalistes in the original French? Are you interested in getting a deeper understanding of English etymology? Do you just love the sound of it? If the answer to any of the above is yes, then why not learn French? It doesn’t matter what Paxman or McWhorter—or Lawless, for that matter—says about usefulness, influence, or anything else. Learning a language is about how it benefits you, not how it may or may not benefit the world.

4 Gobry, Pascal-Emmanuel. Want To Know The Language Of The Future? The Data Suggests It Could Be… French. Forbes. 21 March 2014

I love French language, want's to be french professional....

I find reading French is therapeutic. I am reading 'Les Rois Maudits' - fiction but fascinating. If only I could understand the spoken word.

French will always be the language of nobility

Thanks for doing this amazing site. I didn't realize the author's last name was Lawless - I thought the title of the site was descriptive and love the connotation of going for it in French no matter what. I plan to spend several weeks in the south of France next summer, but my acquisition of the language is painfully slow. I'm using Duolingo and Lawless and any other online help. I think I need to hear the language more than read it, and would love suggestions on that kind of exposure. Vive la langue française!

The title Lawless French is meant to be both - my name as well as a description. Fun with words! :-)

Please take a look at this post about listening practice: https://french.kwiziq.com/blog/french-listening-links/

Laura I agree with your comments, for me, learning the French language has increased my understanding of the English language. Your website and books have helped immensely and will continue to do so.

Alliance Francaise's worldwide aim is furtherance of French. Some years ago, its yearly budget was given as US$2-bln. Today, the budget is likely more.

To my amazement English has become the language most want to learn. Had anyone told me that 30 years ago, I would have considered them sensationalists.

McWhorter has a point that French is the choice of the right people. An orthography (spelling system) not matching French's very eccentric orthoepy (correct pronunciation) puts off most who might otherwise try French. A spelling reform that closely matched today's now widely standardized French's pronunciation and which even non French-speakers could soon figure out would give French a huge boost. Chances of the Academie's fixing French's much-outdated orthography (still suited to a pronunciation long abandoned) are low. The bright side is that in the modern era, widespread printing and broadcasting will keep French pronunciation stable as it has been for centuries.

Then there is popular French's steady linguistic drift from correct French. In time, but surely not tomorrow, the two will be far apart. Chances of the Academie's up-dating official French to something much closer to widely spoken French are also low.

French is more the choice of the right people, because the non French-speakers most ably mastering French are those whose grasp of their own language or possible another one like Latin, which makes French less of a puzzle. So McWhorter is right. The better-educated or the right sorts find learning French easier, which makes it attractive to them. In the US, which has a huge population, Spanish is the language of maids or gardeners, who speak it at roughly 4th Grade level. Good to know talking with the maid or gardener.

Paxman? What to say? Sure, more non native-English speakers speak English. But they do it for their own benefit, not to be nice to us English-speakers. In their countries, we may as well be deaf and are at their mercy. Trump rails at their most often getting the best deals. Well, neither Trump nor Paxman need wonder why most Americans get taken to the cleaners in countries that do not speak English. It's basic! We do not speak their language. We do not even pick up on what they say when they speak their own languages.

Where does that leave us?

We should learn French to interact with and do business with the French. And to let the French know not all Americans are goofy simpletons.

Un gros merci pour votre site web. A big thank you for your website.Thank you for this article. Yes, my reasons for learning French are mine and that's what counts. I have the pronunciation down pat. Now I am looking to be flawless in written French.

Wow!! A helpful and wise article! Thanks!