The 7th Day of Christmas

Posted by Gruff Davies on 31 December 2015
Comments: Be the first

(On the seventh day of Christmas, my true love gave to me: seven swans a-swimming…) 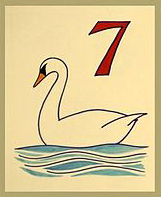 1. le cygne (the swan) – tricky to pronounce, the ‘c‘ is soft and it’s got a nasal ‘-gne‘ – sort of like saying “senior” with a terribly blocked nose.

2. sur l’eau – (on the water) If we wanted to stay really close to “swimming” we could have used nageurs (swimmers) as in “swan swimmers,” but that sounds just as forced in French as it does in English. Cygnes sur l’eau has a lovely alliteration and poetry to it, and sounds more natural. As we’ve already established, “cygnes nageant” (swans swimming) just doesn’t work in French and you’ll get funny stares. Notice that since cygne is masculine, we have nageurs and not nageuses.

I’ve always wondered how you would wrap (emballer) swimming swans as a gift (un cadeau), in any case? Surely the water would ruin (abîmer) the wrapping paper (le papier cadeau)?

Posted on
31 December 2015 in Fun Ways to Learn French