Add to Notebook110 questionsReport a problem

Jouer or faire? In French, like English, we can both play and do sports/games/hobbies, but you need to know which verb sounds correct for each activity. Here are the rules to help you get it right!

Je fais du sport tous les jours.I do sport every day.
Il fait du tennis.He plays tennis.
Sam fait de l'aïkido.Sam does aïkido.
Tu fais de la natation.You swim (regularly / in a club).
You can use faire de followed by la or l' in front of a vowel or mute h, but remember that le and les will contract with de and become du and des.
For some activities, such as skiing or horse riding, you cannot use jouer, just like you wouldn't say I play ski or I play horse riding in English.
ATTENTION:
When using "faire de la danse" or "faire de la natation" (FOR EXAMPLE) rather than simply "danser" or "nager", you refer more to an organised, repeated activity - I take dance lessons / I go swimming [as a regular activity, e.g. attending class or lessons] - than just a 'one-off' activity you're in the middle of doing such as I'm dancing / I'm swimming.
Je fais du ski quand je suis dans les Alpes.I ski when I'm in the Alps.
Je skie avec ma famille.I'm skiing with my family.
-> Note that in that context, the difference is not very noticeable.

Remember, English has two present tenses: I dance (simple), and I am dancing (continuous) which lets us make the distinction between something you do regularly versus something you're in the middle of doing. French has no present continuous tense, so we use faire de to distinguish the regular activity that you do, from the one-off activity you are doing.

Ils jouent au basket.They play basketball.
Je joue aux échecs.I play chess.
Il joue au tennis.
He plays tennis.
You can use jouer à followed by la or l' in front of a vowel or mute h, but remember that le and les will contract with à and become au and aux.
Ils jouent au basket.They play basketball.
ATTENTION:
With music instruments, you will use de instead of à  (See Jouer de = to play an instrument in French). 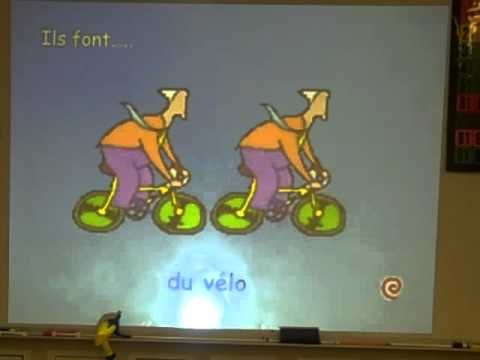